Difference between revisions of "Guided Tutorial GNU Radio in C++"

We will now use gr_modtool to create an OOT module and write our block in C++.

When this tutorial is complete, we will be able to build this flow graph:

The flowgraph demonstrates a QPSK transceiver chain with the block My QPSK Demodulator block module under the OOT tutorial. We will be building this block using C++. All other blocks are standard GNU Radio blocks.

My QPSK Demodulator consumes QPSK symbols which are complex values at the input and produces the alphabets as bytes at output. The output screen looks like this: 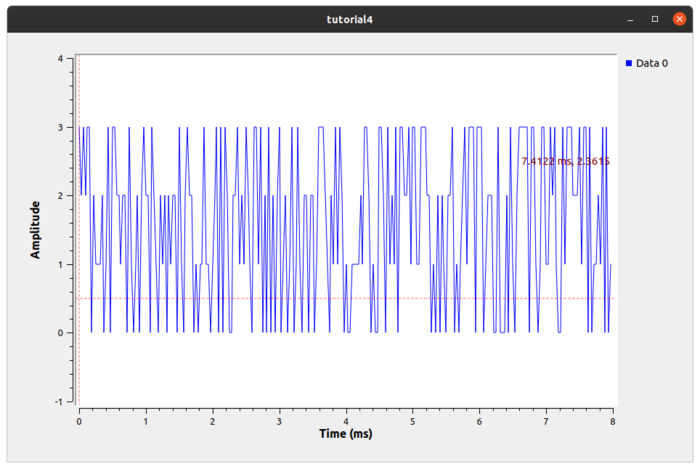 Take a look at the directory structure of our gr-tutorial

Note: The file MANIFEST.md was not added prior to GR 3.8.

Step 2: Insert My QPSK Demodulator block into the OOT module[edit]

Unlike creating an OOT module, creating a block using gr_modtool demands inputs from the user. To follow the command line user interaction, let's decompose the information above.

my_qpsk_demod_cb represents the class name of the block, where the suffix, 'cb' is added to the block name, which conforms to the GNU Radio nomenclature. 'cb' states the block takes complex data as input and produces bytes as output.

In GNU Radio, there exist different kinds of blocks with the different possibilities listed above (since 3.8). Depending on the choice of our block, gr_modtool adds the corresponding code and functions. As illustrated, for my_qpsk_demod_cb block, we opt for a general block.

Since version 3.8, the tool asks for a copyright holder for the code you are about to write. The implications of what you write in that line are legal and not computational.

With this, we have already established the GNU Radio semantics for our block coupled with the OOT module. In the following sections, we will focus on the implementation of our block.

The detailed description of coding structure for the block can be found here.

Step 3: Fleshing out the code[edit]

The next step is to implement the logic for our block. Use your text editor on the file ~/gr-tutorial/lib/my_qpsk_demod_cb_impl.cc.

The completed code is listed at the end of this section, but study the following first!

The skeleton of the my_qpsk_demod_cb_impl.cc has the following structure:

Next, we need to modify the constructor. After modification, it looks like this:

The option gray_code is copied to the class attribute d_gray_code. Note that we need
to declare this a private member of the class in the header file my_qpsk_demod_cb_impl.h,

Also inside this class is the method general_work(), which is pure virtual in gr::block, so we definitely need to override that. After running gr_modtool, the skeleton version of this function will look something like this:

This work function calls another function get_minimum_distances(const gr_complex &sample), which we also need to add:

Note: the get_minimum_distances function declaration also needs to be added to the class header (my_qpsk_demod_cb_impl.h).

Now, let's consider the forecast() function. The system needs to know how much data is required to ensure validity in each of the input arrays. As stated before, the forecast() method provides this information, and you must therefore override it anytime you write a gr::block derivative (for sync blocks, this is implicit).

The default implementation of forecast() says there is a 1:1 relationship between noutput_items and the requirements for each input stream. The size of the items is defined by gr::io_signature::make in the constructor of gr::block. The sizes of the input and output items can of course differ; this still qualifies as a 1:1 relationship. Of course, if you had this relationship, you wouldn't want to use a gr::block!

Although the 1:1 implementation worked for my_qpsk_demod_cb, it wouldn't be appropriate for interpolators, decimators, or blocks with a more complicated relationship between noutput_items and the input requirements. That said, by deriving your classes from gr::sync_block, gr::sync_interpolator or gr::sync_decimator instead of gr::block, you can often avoid implementing forecast.

Refilling the private constructor and overriding the general_work() and forecast() will suffice the coding structure of our block. However, in the gr::block class there exists more specific functions. These functions are covered under advanced topics section

Here is the completed source code:

Step 4: Flesh out the XML file[edit]

In GNU Radio 3.7 the .xml provides the user interface between the OOT module displayed in the GRC and the source code. For GNU Radio 3.8 and newer, see the next section which describes the YAML format. Moreover, the XML file defines an interface to pass the parameters specific for the module. Hence, to access the module inside GRC, it is important to modify the .xml files manually. The XML file for our block is named as demod_my_qpsk_demod_cb.xml inside the grc/ folder. Presently, the gr_modtool's version looks like:

The parameter gray_code can be put under the <parameter> tag.

Like the work function, the datatypes for the input and output ports represented by <sink> and <source> tags should be modified.

After all the necessary modification the "tutorial_my_qpsk_demod_cb.xml" looks like this:

Since version 3.8, GNU Radio has replaced the XML files by YAML. They work the same but with a different syntax.

The .yml provides the user interface between the OOT module displayed in the GRC and the source code. Moreover, the YAML file defines an interface to pass the parameters specific for the module. Hence, to access the module inside GRC, it is important to modify the .yml files manually. The YAML file for our block is named as tutorial_my_qpsk_demod_cb.block.yml inside the grc/ folder. Presently, the gr_modtool's version looks like:

After all the necessary modification the "tutorial_my_qpsk_demod_cb.block.yml" looks like this:

Now that we have finished the implementation of our block, we need to build and install it. To do so, execute the following commands:

In the previous steps of writing the OOT module, we produced the QPSK demodulator, but it doesn't guarantee the correct working of our block. In this situation, it becomes significant to write a unit test for our module that certifies the clean implementation of the QPSK demodulator.

Below is the source of code of the qa_qpsk_demod.py can be found under python/

Obviously the qa_qpsk_demod is implemented in python, in spite of we opted C++ in the first case for writing our blocks. This is because GNU Radio inherits the python unittest framework to support quality assurance. And, if you remember it correctly from previous tutorials, swig as part of GNU Radio framework, provides python bindings for the C++ code. Hence, we are able to write the unit test for our block qa_qpsk_demod in Python.

So lets gather a bit of know how on how to write test cases for the block. Okay, lets consider the header part first:

The qa_ file execution start by calling this function. The gr_unittest automatically calls the functions in a specific order def setUp (self) for creating the top block at the start, tearDown (self) for deleting the top block at the end. In between the setUp and tearDown the test cases defined are executed. The methods starting with prefix test_ are recognized as test cases by gr_unittest. We have defined two test cases test_001_gray_code_enabled and test_002_gray_code_disabled. The usual structure of a test cases comprises of a known input data and the expected output. A flowgraph is created to include the source (input data), block to be tested (processor) and sink (resulted output data). In the end the expected output is compared with the resulted output data.

Finally, the statements in the test cases

determine the result of test cases as passed or failed. The test cases are executed before installation of the module by running make test yielding the following output:

Congratulations, we have just finished writing our OOT module gr-tutorial and a C++ block my_qpsk_demodulator.

The topics discussed until now have laid the foundation for designing the OOT module independently. However, the GNU Radio jargon extends further beyond these. Therefore, under this section, we drift from the QPSK demodulator and focus on the features that are rarely used or are more specific to the implementation.

To add physical meaning to the discussion, we have taken assistance of the existing modules. The source code excerpts are included thereof. Enthusiastic readers are suggested to open the source code in parallel and play around with their functionalities.

In the last section, we managed out implementation of our block by defining functions like general_work and forecast(). But sometimes special functions need to be defined for the implementation. The list is long, but we try to discuss same of these functions in the following subsections.

If your block needs a history (i.e., something like an FIR filter), call this in the constructor.
Here is an example

GNU Radio then makes sure you have the given number of 'old' items available.

The smallest history you can have is 1, i.e., for every output item, you need 1 input item. If you choose a larger value, N, this means your output item is calculated from the current input item and from the N-1 previous input items.

The scheduler takes care of this for you. If you set the history to length N, the first N items in the input buffer include the N-1 previous ones (even though you've already consumed them).

When implementing your general_work() routine, it's occasionally convenient to have the run time system ensure that you are only asked to produce a number of output items that is a multiple of some particular value. This might occur if your algorithm naturally applies to a fixed sized block of data. Call set_output_multiple in your constructor to specify this requirement,

Lets consider an example, say we want to generate outputs only in a 64 elements chunk, by setting d_output_multiple to 64 we can achieve this, but note that we can also get multiples of 64 i.e. 128, 256 etc

Again the implementation of the my_qpsk_demod_cb was done using a general block. However, GNU Radio includes some blocks with special functionality. A brief overview of these blocks is described in the table.

An example of source block in C++

An example of the sink block in C++

An example sync block in C++:

The decimation block is another type of fixed rate block where the number of input items is a fixed multiple of the number of output items.

An example decimation block in c++

The interpolation block is another type of fixed rate block where the number of output items is a fixed multiple of the number of input items.

An example interpolation block in c++

When to use hierarchical blocks?

Hierarchical blocks provides us modularity in our flowgraphs by abstracting simple blocks, that is hierarchical block helps us define our specific blocks at the same time provide us the flexibility to change it, example, we would like to test effect of different modulation schemes for a given channel model. However our synchronization algorithms are specific or newly published. We define our hier block as gr-my_sync that does synchronization followed equalizer and demodulation. We start with BPSK, the flowgraph looks like

Now, our flowgraph looks decent. Secondly, we abstracted the complex functionality of our synchronization. Shifting to QPSK, where the synchronization algorithm remains the same, we just replace the gr-bpsk_demod with gr-qpsk_demod

How to build hierarchical blocks in GNU Radio?

Hierarchical blocks define an input and output stream much like normal blocks. For I input streams, let i be a value between 0 and I-1. To connect input i to a hierarchical block, the source is (in Python):

Similarly, to send the signal out of the block on output stream o:

The class is defined as:

Some main tasks performed by the OFDM receiver include channel filtering, synchronization and IFFT tasks. The individual tasks are defined inside the hierarchical block.

Finally, the individual blocks along with hierarchical are connected among each to form a flow graph.

Connection between the channel filter block to the OFDM synchronization block.

Let's understand the code piece wise. The hierarchical block is C++ is instantiated as follows:

depending on the preprocessor directive SYNC_ADD_DEBUG_OUTPUT.

The individual blocks inside the ofdm_sync_sc_cfb block are defined as follows: