Difference between revisions of "Packing Bits"

Packing bits into a byte is useful in representing binary data (as opposed to digitized RF samples) as well as when using the modulator blocks: Constellation Modulator, GFSK Mod and OFDM Transmitter. Create a new flowgraph and add the Random Source block to the workspace: 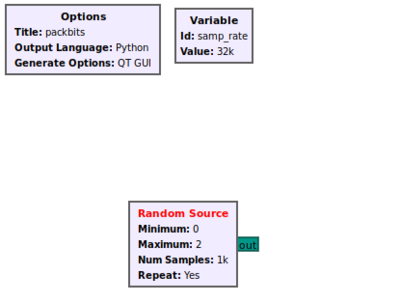 Click on Random Source. It is selected when outlined in light blue: 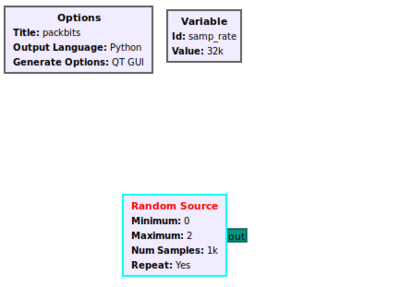 Press the UP or DOWN keys to cycle through the different data types until the byte data type is selected, denoted by the purple output port color: 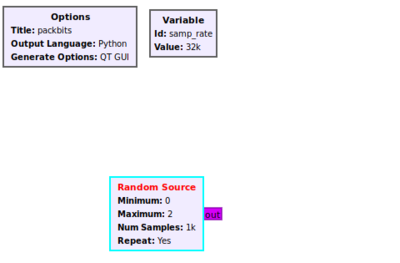 The random source generates bytes with a minimum value of Minimum up to a maximum value of Maximum-1. In this case, Minimum = 0 and Maximum = 2, so it will create binary 0 and 1. A Pack K Bits block is used to parallelize, or pack, multiple bits into a single byte to represent larger binary values.

Add the Throttle, Pack K Bits, Char to Float, and QT GUI Histogram Sink blocks to the flowgraph and connect them:

The Pack K Bits block takes K bits and places them into a byte by filling the least significant bit (LSB) first.

For this example K=4. The Random Source will generate bit B0 first. This will be received by Pack K Bits and then stored in the LSB:

Following this trend, the next bits B2 and B3 will then be stored as:

The following image demonstrates how the block works:

Because K=4 bits have been packed, the byte 0000B3B2B1B0 will be produced as an output and a new byte will be started. The output value of the byte in decimal (base-10) is:

the byte would be represented by 00001010 and the decimal value is: 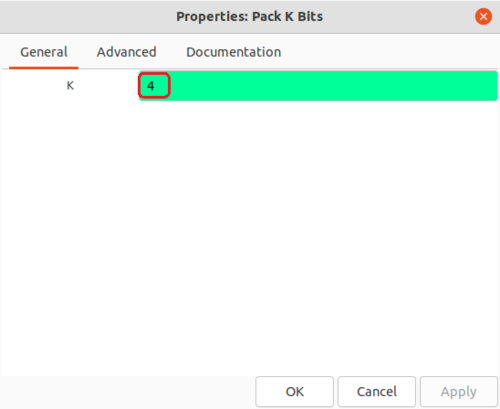 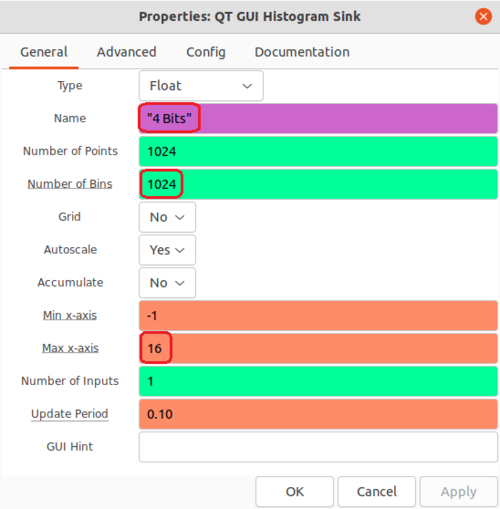 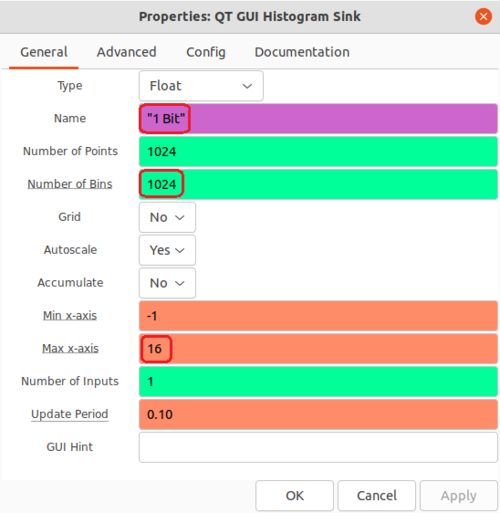 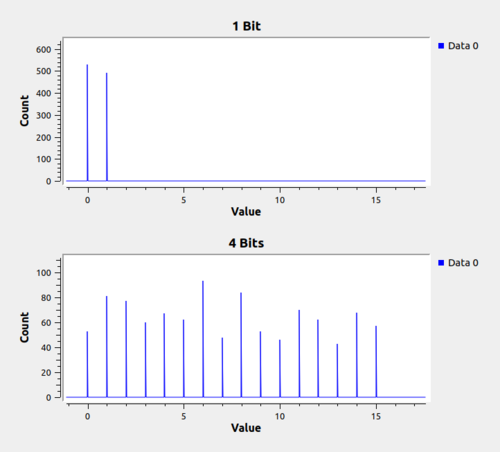 Run the flowgraph. The 1 Bit Histogram shows the packed 4 bits are unpacked (serialized) back into values of 0 and 1: 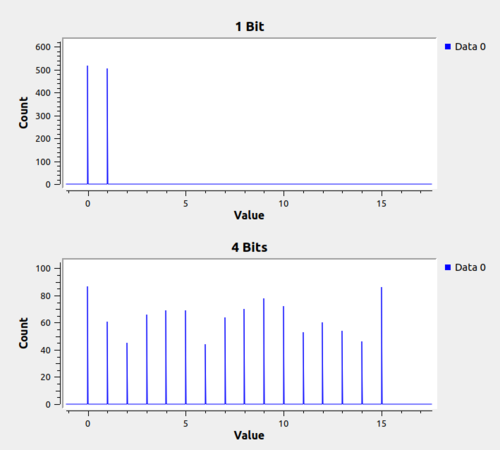 The unpacking starts with the LSB first and proceeds to the most significant bit (MSB). From the previous example, the Pack K Bits produced a byte with bits 0000B3B2B1B0. The Unpack K Bits block produces an output with bit B0 first, then B1, B2 and B3 and the 4 remaining 4 zeros in the byte are ignored.

The Unpack K Bits block perfectly reverses the the operation by the Pack K Bits input stream. This can be verified by adding a QT GUI Time Sink block with two inputs: 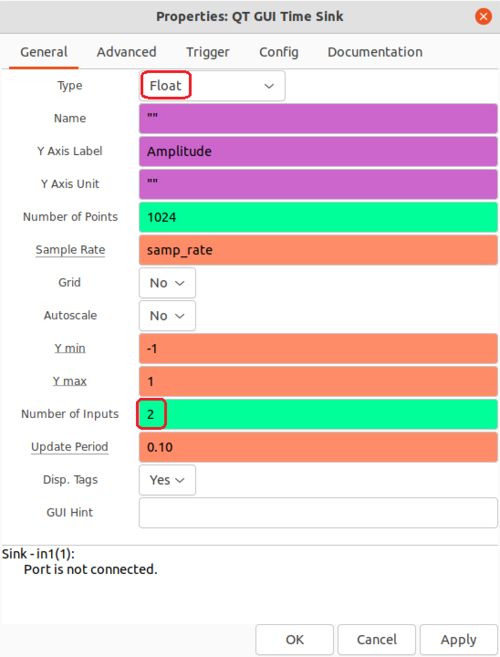 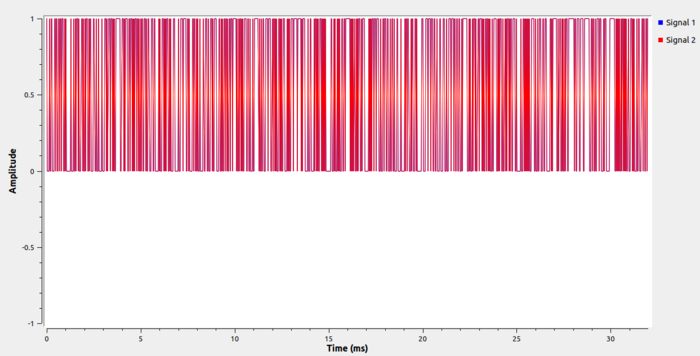 Left-mouse click and drag over a smaller portion to zoom in: 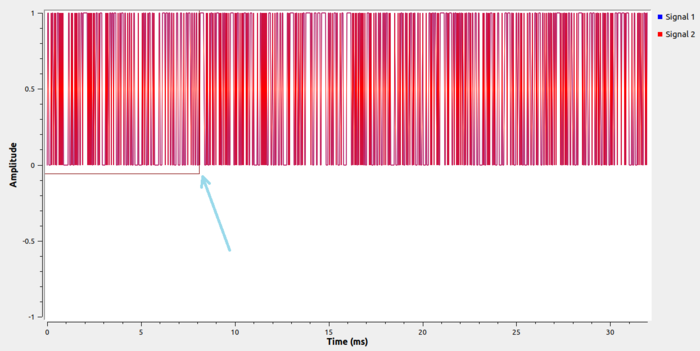 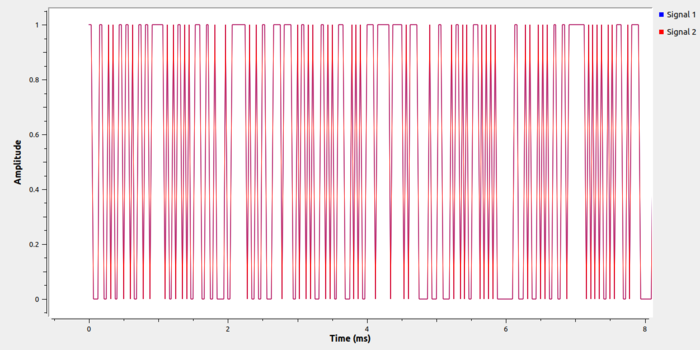 The next tutorial, Streams and Vectors, describes the differences between streams and vectors and how to use them in flowgraphs.