GNU Radio (GR) is an excellent tool for simulating a radio system and experimenting with changing parameters. This tutorial presents a simple Frequency Shift Keying (FSK) transmitter and receiver. It can be performed with GR version 3.8 (and later). The Graphical User Interface gnuradio-companion (GRC) is used to create the flowgraph. The QT_GUI_Eye_Sink requires GR version 3.9 or later, but can be left out if using 3.8. No special hardware is required.

This flowgraph can be found at Media:FSK_example.grc It was generated with version 3.10.

A QT GUI Eye Sink has been added. It is used when tuning live signals to determine the correct center frequency.

How do we know that it's the original bit stream? To verify that, we'll compare it to the input bit stream, which we can do because this is a simulation and we have access to the transmitted data (Stream ID: "xmt_data"). Comparing these two directly shows us that the received signal is some number of bits behind because the transmitter and receiver chain has many blocks and filters which delay the signal. To compensate, we have to delay the transmitted bits by the same amount using the Delay block. Then you can adjust the delay to find the correct value and see how the bits synchronize. Also you can subtract one signal from the other to see when they are synchronized because the output will be 0. Note that it takes a few seconds for the delay to adjust before it can be seen in the output. The correct delay is 145. 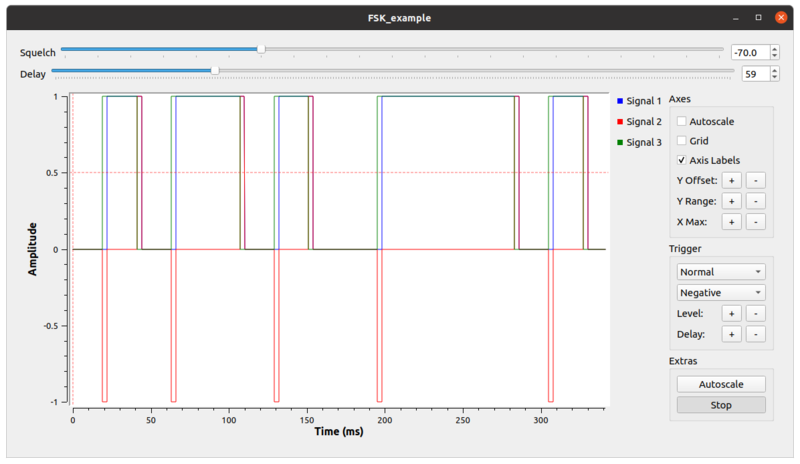