This tutorial presents the GNU Radio ZMQ blocks. It is a set of six Source Blocks and six Sink Blocks. The naming convention follows other source and sink blocks in that a source block provides data entering a GNU Radio flowgraph and a sink block sends data out of the flowgraph. It is a flowgraph-oriented perspective.

From the ZeroMQ website: "ZeroMQ (also known as ØMQ, 0MQ, or zmq) looks like an embeddable networking library but acts like a concurrency framework. It gives you sockets that carry atomic messages across various transports like in-process, inter-process, TCP, and multicast."

The PUB, PUSH, and REP blocks are always sink blocks; the others are source blocks. Choosing which pair to use depends on your system architecture.

ZMQ data blocks transport raw stream data; there is no formatting. The data type and the sample rate are determined by the flowgraph feeding the ZMQ Sink. Therefore the flowgraph or program receiving the data must know those parameters in order to interpret the data correctly.

The cases described below explain the differences in the block addressing. To conform to port addressing defined by the Internet Assigned Numbers Authority (IANA), private ports can be assigned in the range 49152–65535. Within a single flowgraph there is no point in using ZMQ blocks. Using Virtual_Source and Virtual_Sink blocks is much more efficient.

When the ZMQ blocks are in separate flowgraphs but on the same computer, the IP address should be 127.0.0.1 for localhost. It has less overhead than a full IP.

These flowgraphs, using the PUB / SUB pair, are taken from Simulation_example:_AM_transmitter_and_receiver. 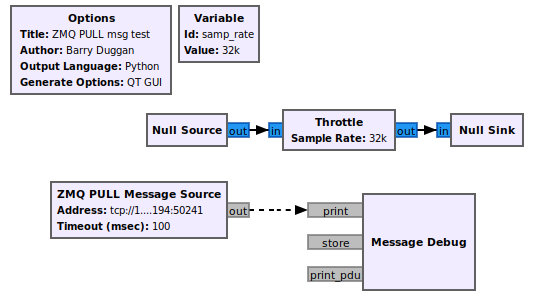 The following Python program receives a string message on its REQ socket, capitalizes the text, and sends the string on its REP socket. The terminology gets confusing here because the incoming REQ came from a GR ZMQ_REP_Message_Sink and is returned to a ZMQ_REQ_Message_Source.

Here's the code to do GNU Radio --> Python over ZMQ PUB/SUB, which is by far the most useful case. Often you use GNU Radio for the signal processing but then at some point you want the resulting stream to go to a regular Python app. PUB/SUB is just so you can have multiple apps getting the stream. In the ZMQ_PUB_Sink you can switch * to 127.0.0.1, but with *, any device on the LAN would be able to see it. It's essentially broadcasting to any interface, not just the loopback.

and the Python code: