Acts as a microphone input. See Audio Sink for a block that outputs to an audio device such as a speaker.

Not all sampling rates will be supported by your hardware. The audio source can have multiple outputs depending upon your hardware. For example, set the outputs to 2 for stereo audio.

To set the Audio sampling rate, click the drop-down menu to see popular rates. Note: not all sampling rates will be supported by your hardware. For typical applications, this should be set to 48kHz.

On OSX, Audio Sink will return only zeros unless the GNU Radio binary is launched from an application that has been granted permission to use the microphone. For example, if you are launching GNU Radio Companion from the iTerm command line, go to System Preferences -> Security & Privacy -> Privacy -> Microphone and check the box for "iTerm2".

Once the application has permission, leaving the 'Device Name' blank will connect to the current default audio input device. To see or change the current device, go into the System Preferences, click on "Sound", and then the "Input" tab.

The listings under "Name" contain the exact device names currently available; if a new audio source is attached to the computer then a new name will appear -- for example "Line In" for some Macs. Since most such device names contain spaces, make sure to put quotes around the name argument, for example:

On Linux, the device is selected via ALSA, typical choices include:

This will use the default device. Note that in most desktop systems this is actually managed by PipeWire or PulseAudio, to check this, you can execute arecord -L | grep -A1 ^default.

This will select the hardware card 0, device 0. To check the list of available cards/devices, issue the command aplay -l (note that -l is lower case here).

This is the same as hw:0,0 but enables software processing, which allows e.g. using a sample rate not natively supported.

For ALSA users with audio trouble, follow this procedure:

On Windows, go into the Settings, cllck on "System", click on "Sound", and then the "Input" tab. The listings under "Name" contain the exact device names currently available; if a new audio source is attached to the computer then a new name will appear. Since most of the device names contain spaces, make sure to put quotes around the name argument, for example:

On by default, which should be used when this sink is not throttled by any other block.

This flowgraph takes audio from the audio source, squares it, to get something proportional to the instantaneous power, then low-pass filters it to approximate an averaged-out power, applies a Threshold to it. The latter starts outputting 1s as soon as the smoothed power crosses 10% of the maximum power, and turns back to generating 0s when it falls below 5%.

The resulting stream of 1s and 0s is multiplied with a 440 Hz tone and then fed into an Audio Sink, allowing the user to hear a tone for as long as there's enough sound at the input. 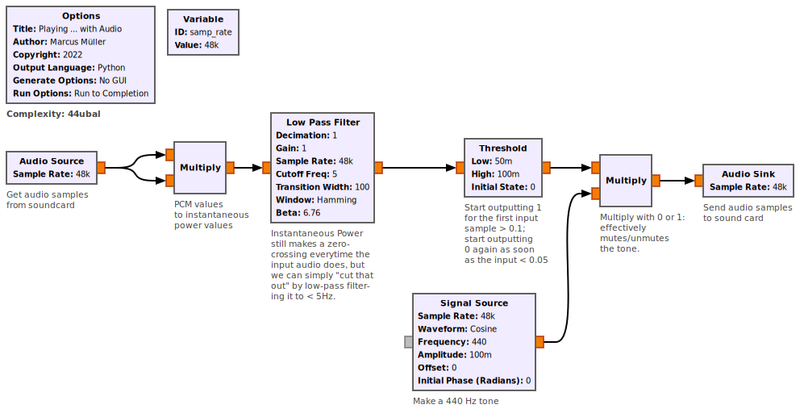