Sometimes a DSP application will call for signal detection of an intermittent signal (only present in the spectrum part of the time). A simplistic way to detect signal is by way of a frequency domain threshold, when an FFT bin exceeds that threshold the signal is 'detected'. Using a 'dumb' threshold would be a first obvious choice for triggering a detection event. The threshold level is the same across the entire spectral window and it is set to a value above the observed noisefloor, but below the minimum level of a particular signal we are trying to detect. With this simple approach (a straight line across the spectrum), a detection event is triggered anytime the threshold is exceeded. Ideally our threshold would only trigger on the specific signals we want to detect, those signals may be clustered together in frequency in a range or band contained within the spectral observation window. If we restrict the detection criteria to only a simple level threshold, some signals within our observation window may trigger a detection in error (since we only want to detect signals in a subband of our observation window) If we can restrict the threshold to not only power, but also frequency, we can still look at a large frequency range and see what else is present, but only trigger a detection if the threshold is crossed within the defined portion of spectrum.

the portion of the spectrum contained within the frequency boundary lines

The flowgraph for this tutorial is shown below along with the GRC file needed if you would like to test it out. 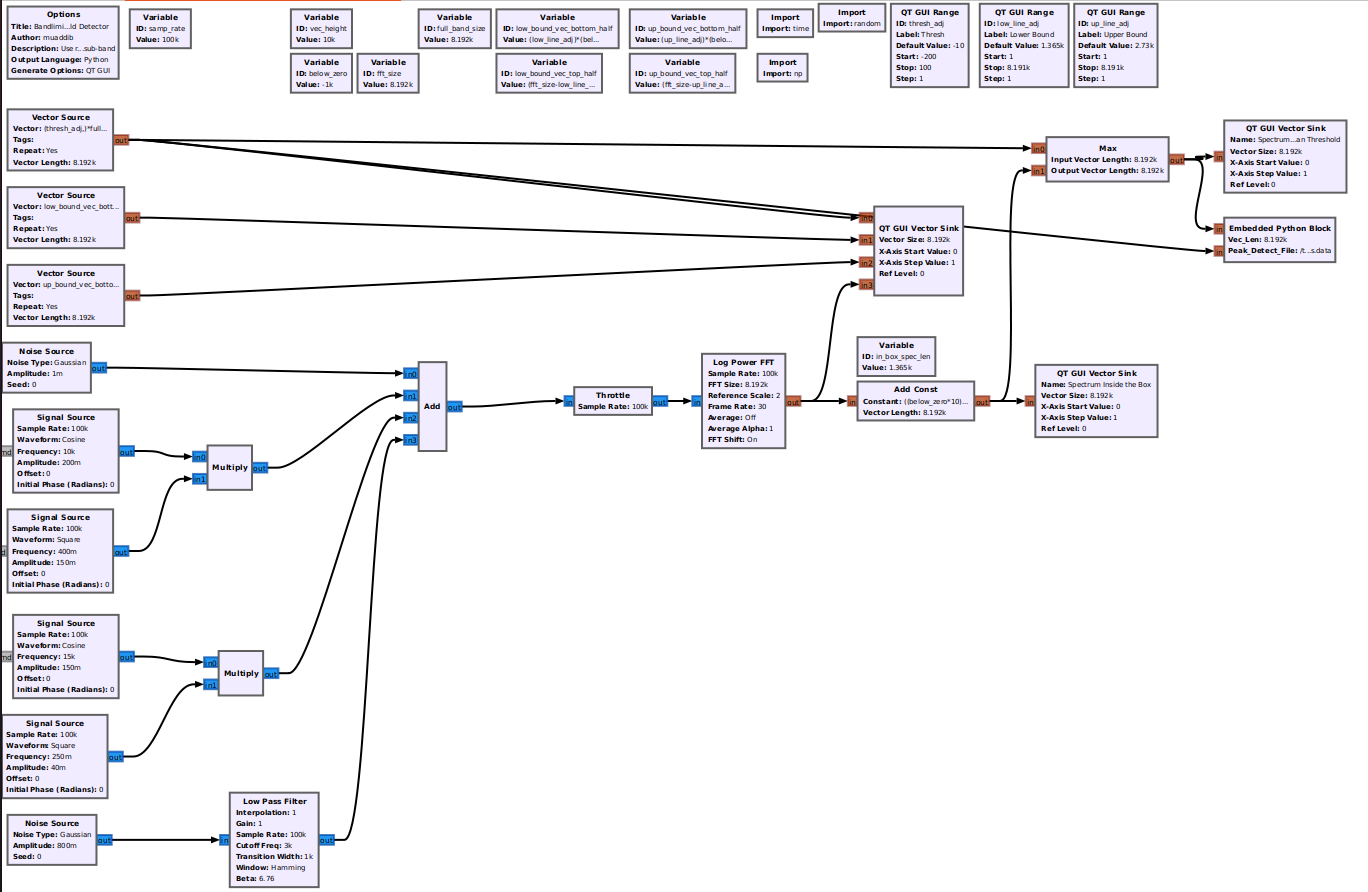 In the following example we will: Generate a synthetic signal for testing. It is assumed that you are comfortable enough in GNURadio to understand what these blocks are doing. 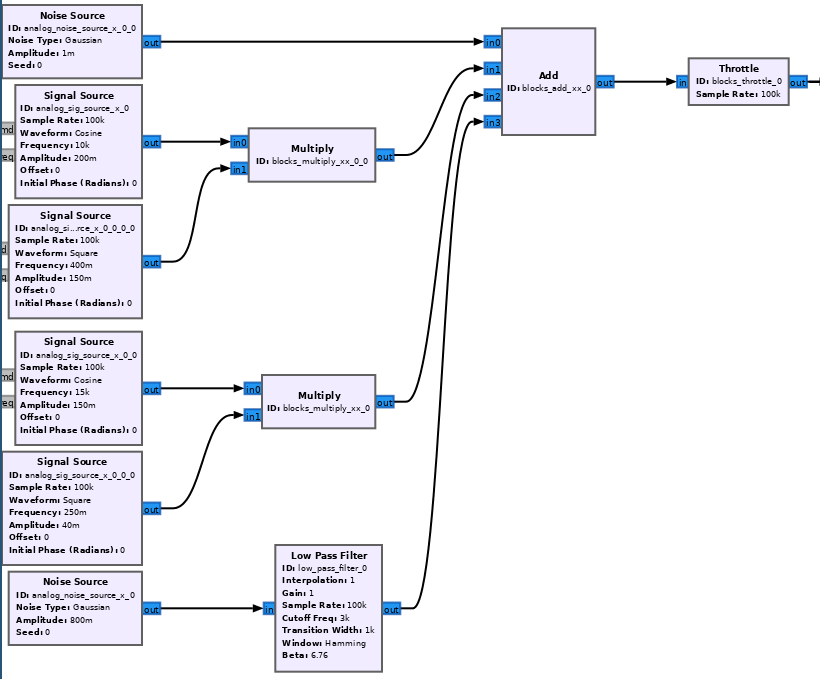 This portion of the flowgraph:

This portion of the flowgraph is where we get creative with Vectors.

For this Flowgraph, we will have an overall FFT size used to display our synthetic frequency spectrum. In this example it will be 8192 FFT bins.

At runtime, the thresh_adj QT GUI Range Widget will set all the indices of this vector to the same value which will display as a horizontal line spanning the entire frequency window. When the variable is adjusted, the line moves up/down.

On a plot, we get a shape like this ____|____ where the flat parts across the bottom are 4 values of -1000 (index 0-3) on the left and 4 values of -1000 on the right (index 5-8) with one value in the middle (index 4) with value +1000. In GNURadio when we represent baseband samples as RF signals in the frequency domain (QT Frequency Sink) we limit the y-axis of the observation window to defaults of +10dB and -140dB, because we won't likely be able to receive signals greater than say +20 on a relative scale with common A/D's in SDR's. Therefore, if we insert a vector into a QT Vector GUI with values that exceed our viewing window, we will only see a vertical line in the window for the value of +1000. We can use that line as a boundary using some array logic in with python expressions.

For the Upper/Lower boundaries we will create vector sources where each vector will adjust it's left and right sides so that both of them combined will equal 8191, adding the vertical line's index to the left and right sides will make the total vector length add up to the FFT length 8191+1=8192

This section of the flowgraph is shown here:

The parameters for the 3 Vector Source blocks are shown here: 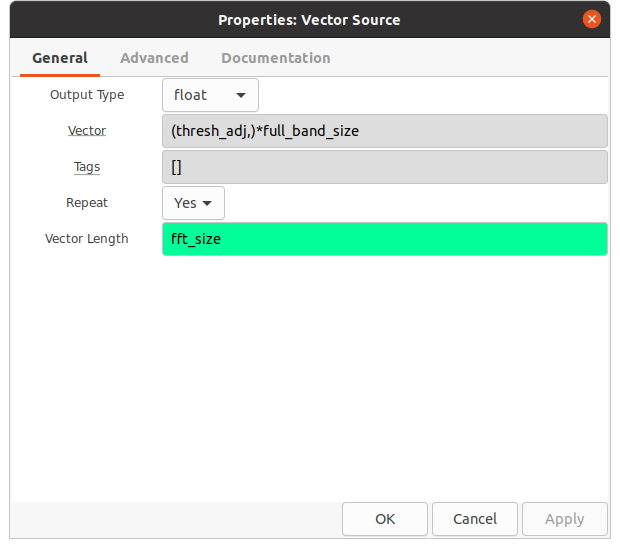 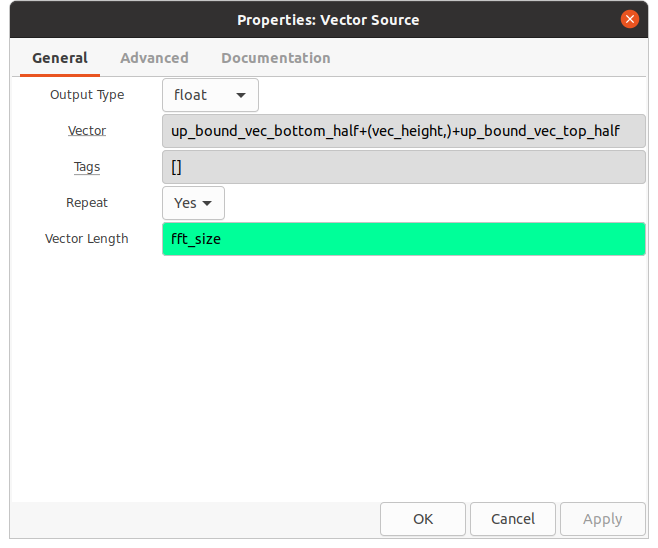 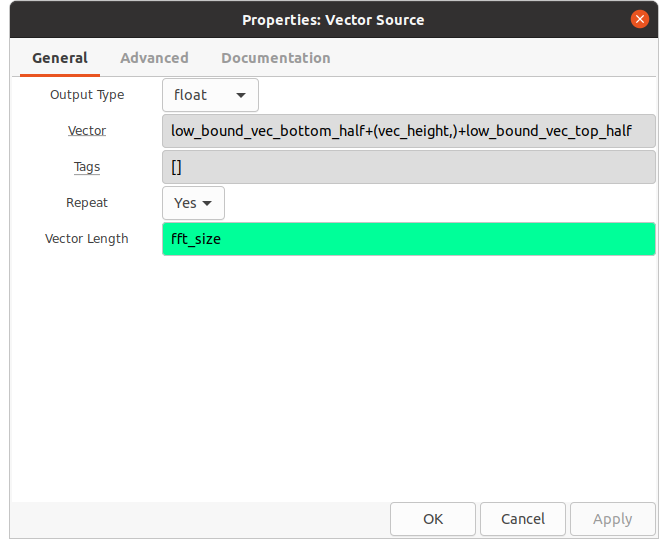 The upper and lower frequency boundary vectors will be constructed to expand or contract in length based on the desired position of their vertical boundary lines.

When the vertical line position is adjusted with the QT GUI Range Widget, the left/right sides will adjust accordingly in real-time. The total will always be the overall FFT Length (8192).

Add the synthetic signal to the Display[edit]

Since the incoming signal is really the main event in spectrum monitoring, we should probably add that to the spectrum window with the threshold and frequency boundary lines. The 4th input (input 3) on the QT GUI Vector Sink is where we add our synthetic signal.

In the section above, we showed how the synthetic signal can be constructed from several different sources and summed together to create one stream of data. Before we put it into our frequency display we need to also convert the time domain to a spectral representation. In this example, we do this by using the Log Power FFT block, which is a combination of several GNURadio blocks in one:

The output is the same type as the threshold and frequency boundary lines (float32) and is also a vector.

This part of the flowgraph is shown here:

When we display these, we will see our synthetic signal's spectral representation, our threshold and frequency boundary lines superimposed on top of the spectrum, show here:

Now that we have lines we can move around our signal, we can also use the variables to do some comparison to only display/passthrough signal if it's within the frequency boundary box and above the threshold.

By identifying which FFT indices (bins) that fall between the lower/upper frequency boundary lines, we can create a value to compare against our incoming signal's spectral representation.

This is done here in the flowgraph:

The value of in_box_spec_len represents a run-time callback, where the value changes as the upper/lower frequency boundary lines are adjusted. 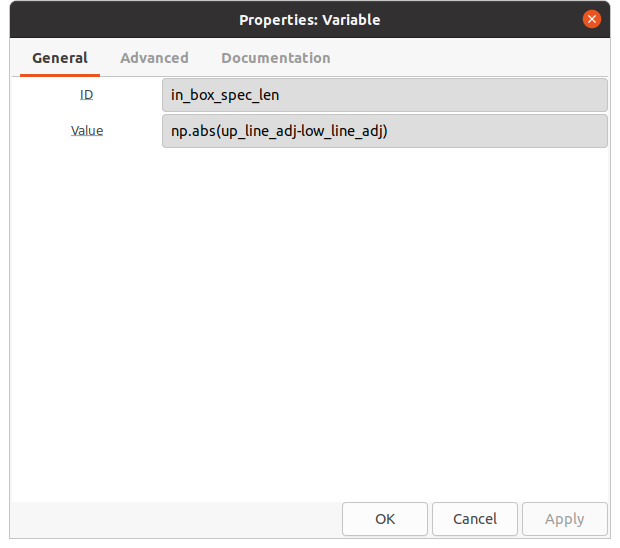 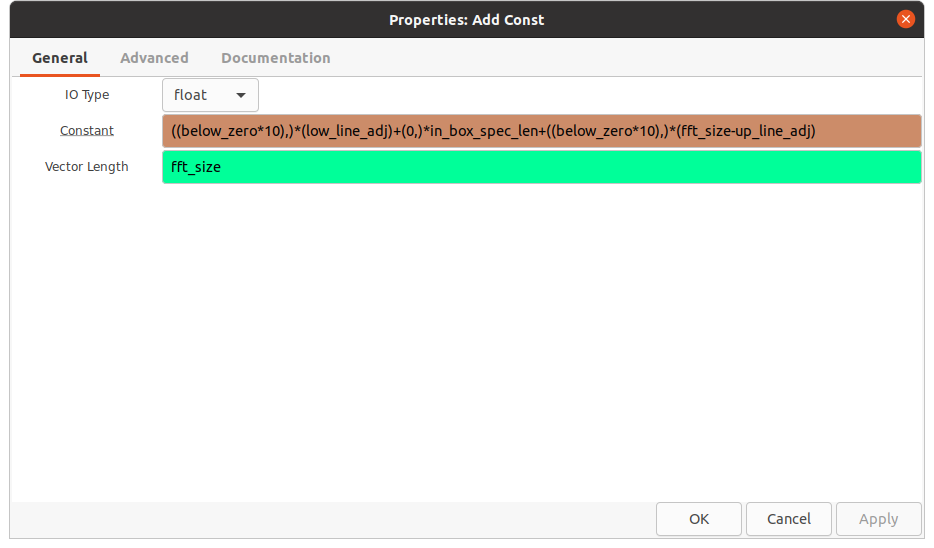 When added to the incoming signal's spectral representation, this results in a vector of length 8192 which preserves the synthetic signal's vector indices between the lower/upper frequency boundary lines.

If the upper/lower frequency boundary lines are set just below and just above the two narrow band carriers, the displayed result is shown below: 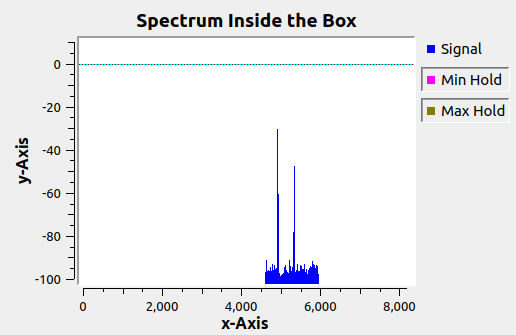 Now the output of the lower/upper frequency boundary check is passed to one input of a max block where it is compared against the threshold.

The output is a vector where every index is greater than or equal to the threshold value. 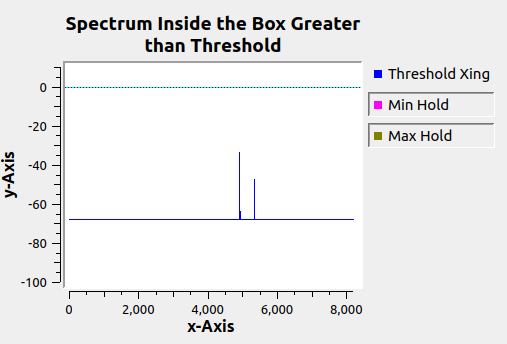 Up until this point, only in-tree blocks have been used. At this point, if we would like to write all values above the threshold, a very simple custom block can be used to extract them from the output of the max block above by comparing against the threshold value as it changes.

The following Embedded Python block will determine if the incoming data is greater than the threshold, thus rejecting the threshold itself and recording only the spectra from the synthetic signal that is above the threshold AND within the frequency boundary. The output file contains the timestamp of the detection, a list of bin numbers and a list of corresponding magnitudes.

NOTE: It is true that the last step above could be skipped and this custom block used instead if all we want is the values written to file, however the above step allows a simple way to clearly visualize which values are above the threshold.

Here is a brief demo of the flowgraph in action: