This tutorial demonstrates how to create a tuple or array of filter taps and apply them within a low pass filtering block.

This tutorial makes use of the flowgraph developed in the previous tutorial, Low Pass Filter Example, so please complete it before continuing. The next tutorial, Sample Rate Change, describes how to perform sample rate change in GNU Radio. 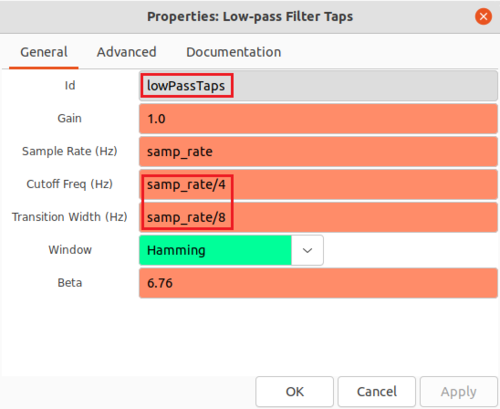 The Low-Pass Filter Taps block saves the filter taps as a tuple as variable lowPassFilterTaps. A tuple is a data type in Python that is like a list or array but is immutable, meaning it cannot be changed once it is created. Tuples are represented by python by parenthesis, (item1, item2, item3). You can get more information on Python tuples here.

Double-click the Frequency Xlating FIR Filter block to edit the properties. Enter lowPassFilterTaps for Taps and leave all of the other parameters the same. Hovering over the lowPassFilterTaps variable displays information about the filter taps: 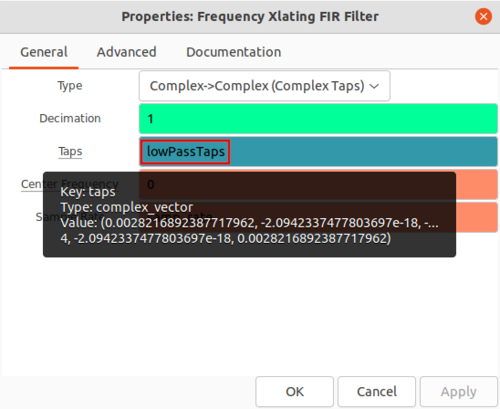 The first couple of filter taps are displayed in a tuple. Blocks in GNU Radio can accept data objects as parameters such as tuples, arrays and lists. In some instances, blocks require their parameters to be of a specific data type. Save the properties and run the flowgraph: 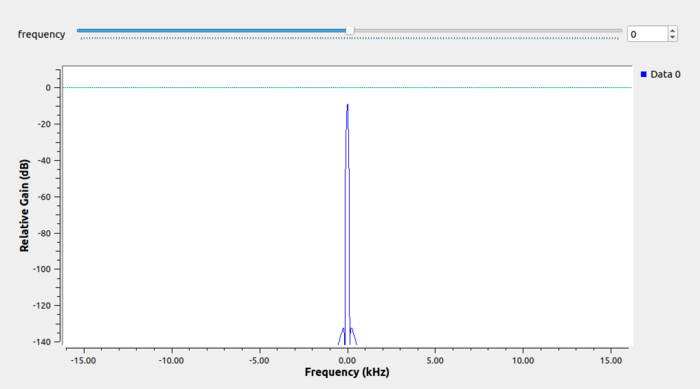 Scroll-wheel-click and select Max Hold, then slowly drag the frequency slider across all of the values. The magnitude of the frequency response can then be seen through the outline: 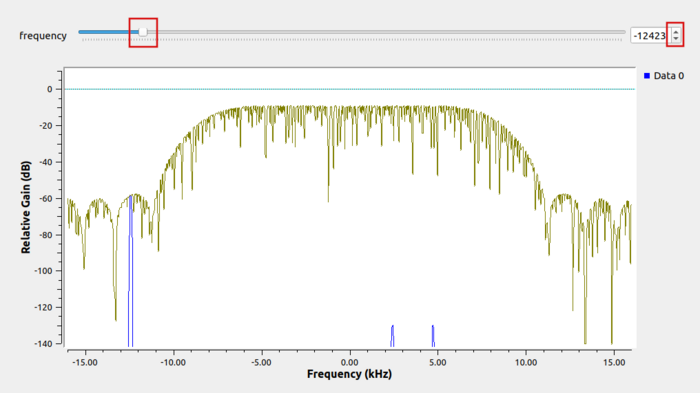 Alternative methods can be used to design filter taps and then enter them manually as a Python variable. For example, the Frequency Xlating FIR Filter block accepts filter taps as a NumPy array. An import statement for NumPy is needed to be able to access it's functions and data types. Add the Import block to the GRC workspace:

Double-click the block and add the import statement: 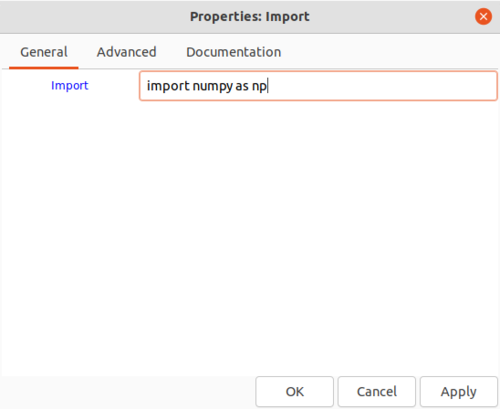 A simple moving-average filter, or boxcar, can be designed by setting all of filter taps to be the same. This can be done by using the NumPy ones() function which returns a NumPy array of all ones with a specified length. Create a variable named boxcarFilter with the Value being: 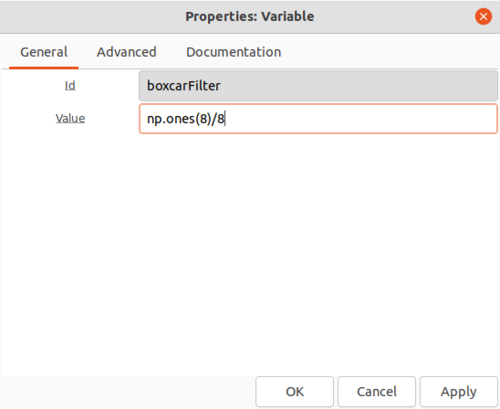 Right-click on Low-Pass Filter Taps and then Disable:

Then edit the properties of Frequency Xlating FIR Filter and replace lowPassTaps with boxcarFilter. The flowgraph looks like the following:

Run the flowgraph, select Max Hold and then sweep the frequency slider. A different frequency response magnitude can be seen now that different filter taps are used: 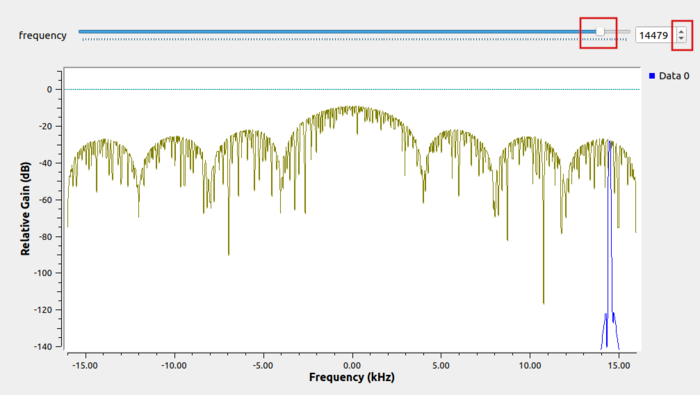 The lowPassTaps are used as the basis for a complex band-pass filter. Create a variable n with the Value 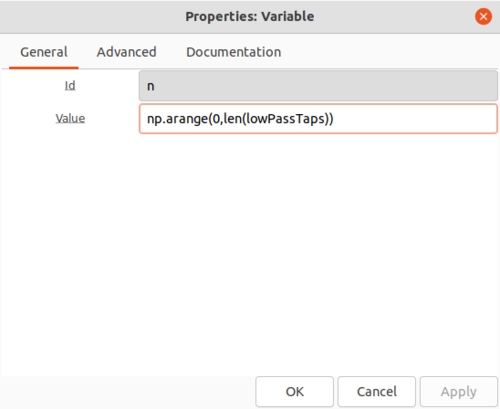 Create the frequencyShift variable with Value: 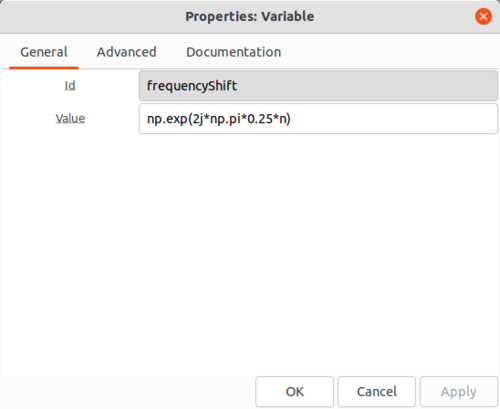 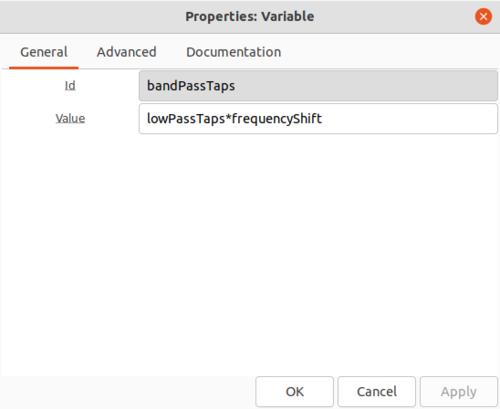 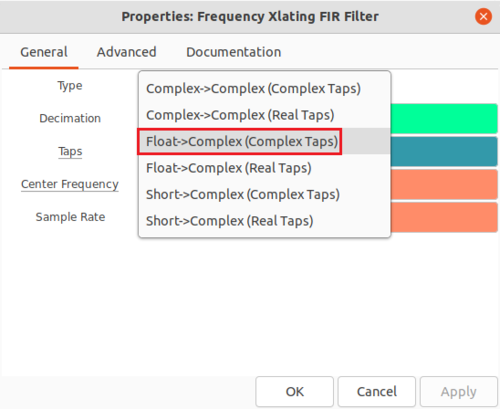 Edit the properties of the Signal Source and convert it to a real signal. 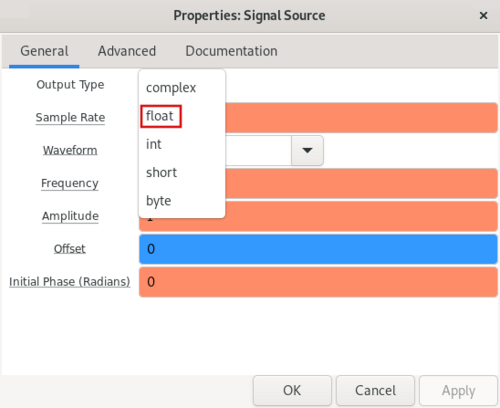 Run the flowgraph, turn on Max Hold, and sweep the frequency variable: 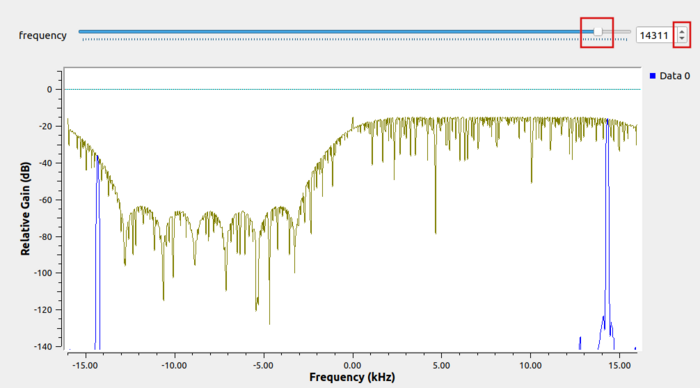 The next tutorial, Sample Rate Change, describes how to perform sample rate change in GNU Radio.